The rules for this award are:

Thank you so, SO much to Teddy’s New Bear for nominating me for the Creative Blogger Award.  I am very flattered this Friday. 🙂

Five facts about me:

That was  lot of “I”s, but it was supposed to be 5 facts about me, I guess.  And now I have to nominate people.  Another fun fact about me: I’m too lazy to nominate that many people.  Here are the nominees-

Well, that’s five….  They are all great blogs and I highly recommend checking them out! Nominees- your rules are at the top of this blog post. 😉  Thank you again to my nominator,  she has a pretty cool blog that should be explored as well!

Have a terrific weekend, and be creative!  If possible, that is.  Speaking for myself, it can be kind of difficult…. but I’ll try!

Here are all the occurrences from May!  Nothing too, too exciting,  but hopefully nothing boring either.  😉  Quite a bit of this happened last week because my memory just doesn’t remember the previous weeks that well.  But I’ll get started, as I am sure you are dying with curiosity what I did with my month, and how it relates to what I mentioned in the title of this blog post!

I’m thinking that’s about it!  Like I said, nothing too exciting.  But then again, you can’t say I was sitting around twiddling my thumbs either.  I hope you had a wonderful month of May!  I’d love to hear what you did.  🙂  Thanks for reading, and have a lovely weekend.

Brown and Beige to Belgium!

Well, it’s finished…. And actually, it’s already in Belgium!  Or so I’ve been told…. I had a few glitches along the way, but my first international order is coming to a close.

Last Wednesday(not a day ago Wednesday, but a week ago Wednesday), I put the finishing touches on my custom order.  I got home from work, and prepared myself to felt the Mohawk.  Just to let you know, a Mohawk hat must be felted, or it looks like a rug on top of a hat.  To get the spiky Mohawk, you have to soak it in soapy hot water and aggravate the wool in it.  Yes, I was aggravating my wool.  Anyway, I nearly had a heart attack when my wool wouldn’t felt.  Like, I repeated the process several times and it was *still* a floppy mess- there were no spikes involved.  Well, other than the imaginary spikes in my head, getting closer and closer to popping my balloon of success and happiness about my first international custom order.  And that above is why I rarely ever make creative comparisons- because my creativity is wacko and my comparisons stink…. So, back to my story…. The wool was NOT getting aggravated-  I was getting aggravated.  So, after probably the 10th time(very little exaggeration involved here….) of little success, I got more aggressive.  Instead of rubbing it in between my hands, which has always worked before, I started rubbing it fiercely against a flat, but textured surface.  My hopes of it working were low, but I was also getting pretty desperate at this point- I HAD to ship it out by the following Tuesday, I was almost out of yarn, and there was absolutely no way I could make another one.  Imagine my massive surprise(and even more relief!) when it actually worked! 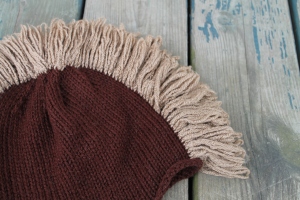 The day after that, Thursday, I took my little project to the post office.  I was quite happy that it seemed to be sent without a hitch.  Friday I checked the tracking number- USPS says that number doesn’t exist.  I thought that was okay- it was only the day after, and with all the Valentine’s Day mail….. Yes, I was grasping for excuses.  And they only got worse from there over the weekend, when my package and it’s tracking number *still* didn’t exist!  Monday I tried to call the post office, but then I realized it was President’s Day.  Sigh…..So, Tuesday, almost a week later, I finally talked to the nice post office lady.  Apparently, their computer system crashed or something like that, and she couldn’t check it at the time.  She called me back yesterday, but I was at work.  I returned her call today(tag- she’s it!) and got good news- my package is already in Belgium!  I’m not too excited that I can’t see it myself on the computer, but I was told that the problem is a result of that computer crash last Thursday.  So, now I have to play the waiting game and see how it goes about getting to my customer in Belgium.  We’ll see!

Have a lovely day!!!

This week, I finally went international!  Would you like to take a guess at how I accomplished this feat???

I have never actually traveled internationally, so that is not it. Come to think of it, I’ve never even ridden in an airplane…. *Mark that on the to-do list*

No one from Belgium is coming to visit me….and that wouldn’t make me the country-hopper anyway.

If you have any more creative guesses feel free to comment them below, but I’m going to tell you anyway- something I have knitted is going to Belgium!  Last Monday I received a custom order through Etsy for a Mohawk hat in brown and beige.  The order wasn’t exactly ‘with love’ because I don’t know this person, but I couldn’t resist the title….And the hat shall be sent with love!  After it’s knitted and felted with love.  🙂  So, that is my excitement for this week.

If you would like to see the original, look here.   You’ll have to use your imagination for the brown and beige part though, because I don’t have any pictures yet.  Perhaps I shall when my work is done!  The body of the hat is going to be dark brown, and the exciting Mohawk part will be beige.  My dear customer didn’t request a letter, like the original has, but it’s his order so I’m happy to accommodate!

And now, I have a simple tongue-twister for you- “Brown and beige to Belgium”…..Say that five times fast. 🙂

Thank you very much for reading and have a wonderful week!  I’m off to go a-knitting….

And how it can lead to World Peace. I bet you’ve never heard that one before! 🙂

You might have been wondering (or not) when I am actually going to write about knitting or knotting, because I haven’t since the beginning of my blog.  Well, here goes.  I’m going to explain how knitting could bring about World Peace (theoretically).  This is merely a humorous speculation (hopefully). To accomplish World Peace, we would need a lot less sin in the world, not just more yarn, and regrettably knitting rarely has that effect on people.  I should also inform you that this revelation ‘came to me’ when I was rather young, which may help you understand why it’s so impractical.

My brilliant plan for World Peace was to teach everyone to knit.  This way, those people with evil intentions would be too busy to carry out any of their plans….  Those people without any intentions at all would be given something to do…. Those with too many intentions would be able to relax with a simple knitting project and take their stress out on that….  And those who are formulating intentions could do something productive while contemplating!  Just imagine how warm the world would be!!! 🙂  That’s another benefit-  we could clothe so many needy people!  I’m just waiting to be contacted for my Nobel Peace award…. Just kidding!

Now, obviously there are flaws with this.  I am sensible of that.  For example, I know many people who have tried knitting already, and it just isn’t for them.  Maybe we could have World Peace through knitting and crocheting…. Another flaw would be all those poor little naked sheep, alpacas, bunnies, etc., that gave their way of staying warm to others….however, they can just grow some more.

Here are some practical benefits of knitting, if you made it through the silly speculations above. 🙂

So, there you go.  Hopefully, if you were considering trying to knit, I have made you eager to start, and not scared you off!  The world could always use more knitters….even if it doesn’t lead to World Peace.

If you’d like to see an example (or two) of knitting, I’d love you to visit my shop on Etsy- To Knit or Knot.  Have a lovely day, hopefully with a little knitting, but I don’t wish any knots your way!

Do you have any ideas for World Peace, be they impractical or just plain silly?  Let me know in the comments below!

My love of crafting started a long, long time ago…in this galaxy. 😉 As a young girl, I tried several forms of needlework, and handwork in general. This included a little bit of embroidery, quite a few things made from a lap-loom(they make great gifts! Or at least, I thought so….), making a quilt with my sisters and my mom for our babysitter when she was getting married, attempting to learn crocheting, and so on. All of these kept my hands busy, but I never really went very far with them….

When I was eight years old, I got a basket for Christmas. And it was not an empty basket! It had probably between eight and ten skeins of yarn in it, a beginners knitting book(specifically for children), and a pair of knitting needles.

Over the next year, I learned(with the guidance of my dear mother) how to finger-knit, roll skeins of yarn into balls of yarn, and knit the garter stitch. Thankfully, the phrase “Practice makes perfect” is true in my case(or at least, mostly true- my knitting still isn’t quite ‘perfect’!)- my first doll blanket is a little bit of an eyesore. But, at the time, you can imagine how proud of it I was. This blanket was something I had made, and it could be used by my dolls!

I love to knit!

By the next Christmas, I was knitting presents for all my family and friends. I will tell you now, they still were not quality pieces of work…. It’s the thought that counts, right?  The next thing I was taught by my mother was how to purl. I actually had to learn this several times, being completely honest(thankfully, my mom is a patient teacher).

At this point, I was on my own. I had reached the limit of my mother’s knowledge of knitting(she’s more of a quilter). So learning new techniques was a little bit more of a challenge, and involved books, or the Internet. But I continued to learn more, and love it!

Cables and lace came next- both kept me fascinated! I struggled the most to learn how to cable, the instructions I read just didn’t make sense. And I really had an urge to learn cables!!! Finally, I found the explanation that just ‘made sense’, I guess it had to be put a particular way….

A knitting project in process- a hat for my sister….

Tatting has become another craft that I have more than a passing interest in, although it’s still not like knitting…. My experience with tatting has been a little more ‘knotty’ and I have only been doing it for a couple of years. Hopefully, I will become a proficient before long.

My goal is to be like the woman described in Proverbs 31, and among her other characteristics, “She selects wool and flax and works with eager hands…” ~Proverbs 31:13. I have been knitting for over 10 years now, and it still is my favorite thing to do. So much so that I decided to open a shop on Etsy-  https://www.etsy.com/shop/ToKnitorKnot1013

And that’s all folks! You now know how I began knitting, and why I haven’t stopped. Thanks for reading, and have a great day!